The first Lithuanian Folk Song Development Contest took place at the Lithuanian Academy of Music and Theater (LMTA) on the 3rd of March, 2020. Eight students currently majoring in choir conducting participated in the contest and they were evaluated by the Lithuanian National Prize for Culture and Arts winners, composers Algirdas Martinaitis, Zita Bružaitė and Vaclovas Augustinas. The aim of this contest is to grow the students’ interest in folk songs, develop their creativity, make folk art more relevant today and encourage creation of new pieces. “This contest was initiated to encourage the students majoring in choir conducting to begin working on the choral pieces. Choir leaders often need to arrange choral pieces in order to modify the piece to their choir abilities. The ability to work with the choral scores, correctly arrange the voices, to understand the range of each part and many other tasks are very important to the future choir conductors” said Rasa Gelgotiene, the president of the Lithuanian Choral Union, who initiated the contest.

The main mentor of the contest participants, associate professor L. V. Lopas, not only helped students with their creative process but also led three seminars on the choral arrangements, where he explained what is an arrangement and how it differs from composition. “Just how architects learn to understand spaces and volumes through drawing, musicians train their ear by writing. By grinding a rough diamond, with the help of writing we can reveal the content of the song, give a variety of different colors, to think linearly and do more than just harmonize according to the rules.”As one of the contest initiators, associate professor L.V. Lopas that this contest was finally organized: “All the participants are very glad that they had such a practice. In the past we used to have a subject of folk composition with the professor J. Čiurlionytė. It encouraged us to get acquainted with more folk literature than what is known to the general public.” The competition took place with the help of other lecturers from our department, associate professor G. Venislovas (the head of the choir conducting department) and assistant dr. L. Balandis; they ensured smooth work and prepared the choir for the performance at the contest (choir conductor L. Balandis).

The participants see this contest as a positive experience, but they did not hide that they underwent several difficulties on the way. “This contest is a huge number of “first times”. It is useful, but also difficult; it is like a cold shower where you can get a lot of inspiration. I could not choose just one challenge as everything was difficult at the beginning; at first, I had to pick a song, then I had to arrange it for a choir and not a piano (I think that many composers meet this challenge). Later, I had to wait for the rehearsals to finally hear how everything sounds. We also had some technical challenges. Many of us used the “Sibelius” program for the first time, thus we had to consult with our lecturers” said student Iveta. The participants of the contest delayed their work as this was only their first attempt at arrangements, and the students of performing specialties often do not see themselves as composers. Student Evita said that “I agreed to participate in the contest unwillingly. I always thought that I will never compose, that is not for me. But when I finally chose a folk song and began writing, the work, thinking, singing of different parts and themes attracted me. I had plenty of time to finish the piece, but I met a few challenges. The most difficult part was the connection of verses! Now that the challenges are in the past, I am very glad that I had a chance to test myself in composition and arrangement.” Another participant described the challenges in more detail: “The first and not an easy task was to find the right folk song which could be arranged. The creative process led me to study the less common covenant chords, more interesting composition methods, to see the pieces created by others through a different compositional angle. I did not want the piece to have only a melody with a harmony. In order to understand dramaturgy, I had to get used to the song, just so I could find the best and most appropriate means of expression. Although this experience was completely new, but I do not doubt that we received a lot of experience which will be useful in the future.”

The jury was pleased with the participants and congratulated the organizers: “First, we would like to congratulate the associate professors L. V. Lopas and G. Venislovas. The contest has many participants and the arrangements are of high quality. Any of these pieces could be performed at a concert of any choir. The choir performance did not influence our decision. I hope that this contest will take place next year and will receive even more applications.” Said composer Vaclovas Augustinas. Composer Zita Bružaitė said that “All I can say is that all these pieces did sound”.

The arrangements were evaluated in the scale of 100. The winners and special prizes:

We plan to publish the pieces of the contest winners, but you can listen to the other great pieces here:

“Those songs are like precious marble rocks and they await for the genius who will know how to create immortal works” – M.K. Čiurlionis 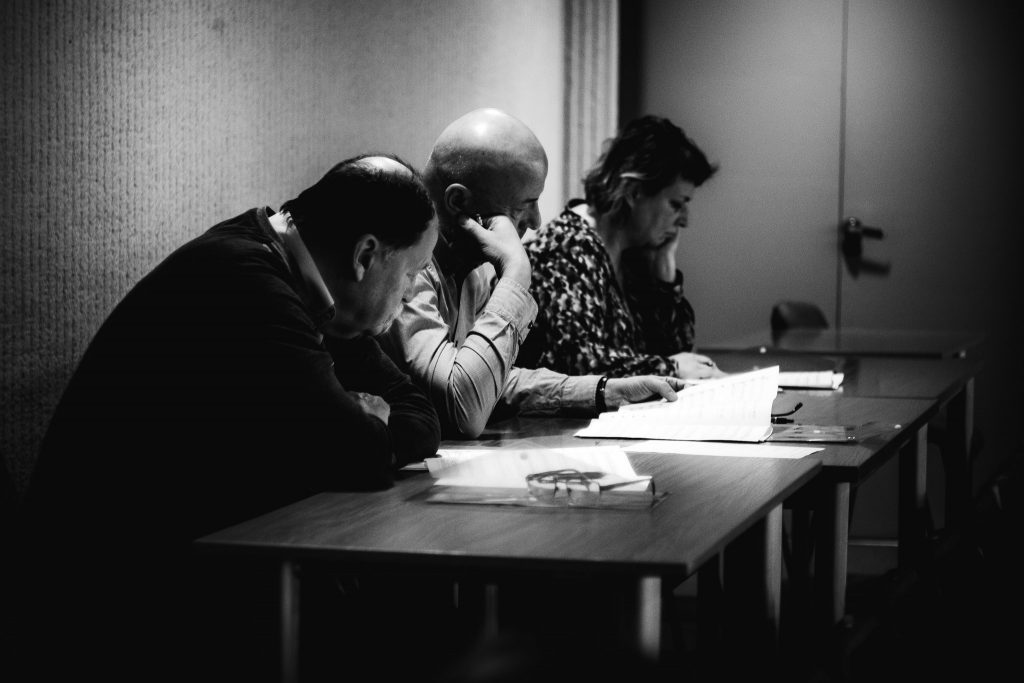 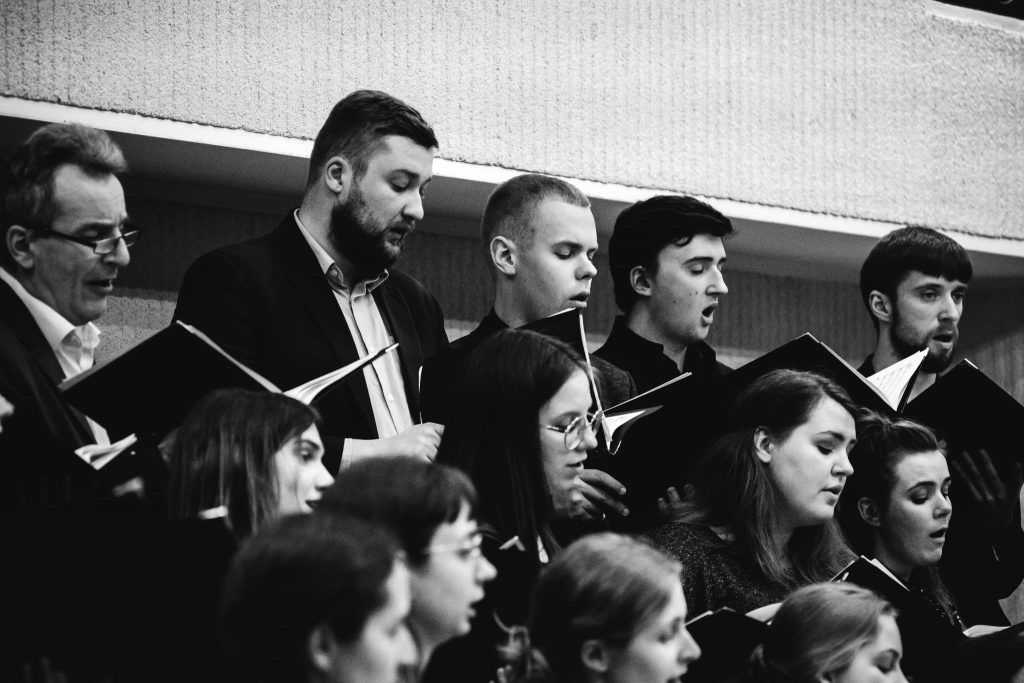 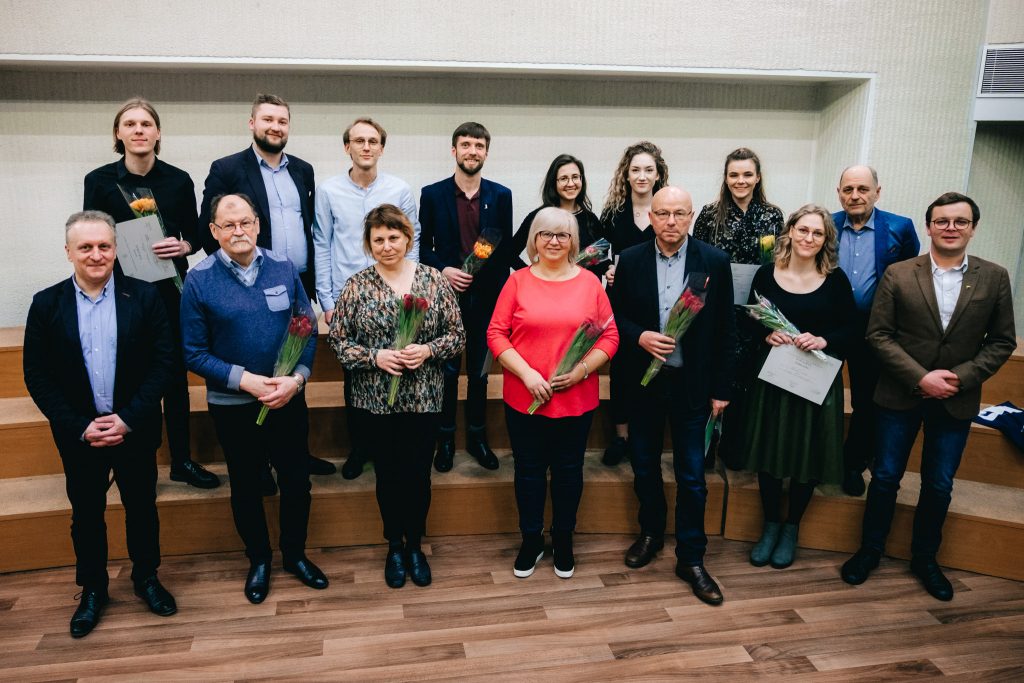